Some people can't get Facebook accounts. Facebook can shut down an account, locking you out of VR. It's hard to get people to fly Condor when other flight sims supporting VR don't require Revive. Are there any plans to move Condor to OpenXR? If not, please consider it.
Top

Not only do I not have Facebook I am vehemently opposed to them and will never have an account. Current Oculus SDK-only support also hobbles the performance of people's headsets, especially since you now have to disable MSAA now after a few patches ago or else the screen goes black.

I don't even play anymore because even on an Index with a 2080, without MSAA there is intense shimmering and ultimately ruins my experience. Pancake gaming is dead to me, especially sims and particularly soaring.. the type of flying I do irl and VR is the only thing that even comes close.

In contrast, OpenXR would not hinder current users regardless of which hmd they have however anyone using non Oculus hmd would benefit greatly by not being stuck with reVive/Oculus, now with looming implications of mandatory Facebook accounts.

Please Condor dev team, make VR support universal and unhitch it from Facebook/Oculus. it will not hurt Oculus users and this also has nothing to do with Steam.. the sdk can be used by anyone regardless of where their game is sold. It exists to unify standards to prevent 'walled garden' scenarios like it's falling into.
Top

I fully support this request, though have no idea how much work is required. VR is the future for Condor and an Open VR solution makes the most sense, especially as even the curent Oculus headsets (Quest 2) need to use the Revive / Steam VR route to make them playable.

k6chris wrote: ↑
Thu Oct 29, 2020 7:44 pm
I fully support this request, though have no idea how much work is required. VR is the future for Condor and an Open VR solution makes the most sense, especially as even the curent Oculus headsets (Quest 2) need to use the Revive / Steam VR route to make them playable.

I agree too. Nowadays, Oculus (Facebook since now) has let down the Rift S, and th new HMD¨S like Valve Index, or the HP Reverb (1 and 2) works better without Facebook .
I own a Valve Index and are waiting for the HP Reverb 2, and my favourite sim is Condor. I don´t want to create a Facebook account only to run the sim, not using a Rift or Quest HMD.

So I say too: Pretty please...

I'm quite new to Condor 2 and have had more quality time in VR (currently Rift S) in this sim than anything else.

I have a Reverb G2 on pre-order so will be looking to switch to that using Revive. However, in time, I have no intention of linking my Oculus account to Facebook so come January 2023 (IIRC) my Rift CV1 and Rift S will be paperweights. Will Revive stop working then too? I'm not clear on that. I know it's a way off but now's the time to be moving forward to wider VR compatibility please. If it is on the roadmap, please do let us know.

Link doesn''t use Steam . What am I missing ?
Top

Link doesn''t use Steam . What am I missing ?

If you use your Quest 2 to play Condor natively (ie just start up C2 and then use Q2 / Link) the result is very choppy, with a low and variable frame rate and lots of dropped frames. This would appear to be happening on all PCs, rergardless of GPU / CPU / Memory. This did (does not?) happen with the original (older) Rift or Rift S headesets. If you start up C2 using the "Revive / Steam" route (which is used for non-Oculus headsets), then the experience gives a much smoother experience, without the dropped framrates. Using the "Condor 2 Revive Helper" utility (see elsewhere in this forum) makes that process a simple 'one click'. All Quest 2 users should try the "Revive" route as it makes the expereince a LOT better. Hope that makes sense??

Microsoft, the inventers/owners of WMR, are not even using their own platform for VR in MS2020. Instead, VR support will be OpenXR in FS2020.

Let that sink in.


MSFSim 2020 is slated to be the 1st (AFAIK) major OpenXR title coming to your PC VR HMD. We've been working closely with @AsoboStudio
on @MSFSofficial
as it'll be the showcase proof-of-existence for VR devs to trust @OpenXR
going forward. No pressure

Hopefully this finally demonstrates what users here have been trying to convey - proprietary SDK's are a dead end for users as well as sims that settle on them and OpenXR is the way to move forward. This would help everyone at the same time, including whoever is tasked with ongoing game maintenance.

As of Nov 2020, roughly 1 out of 3 headsets even uses the Oculus SDK (Oculus Rift and Rift S) anymore according to the latest Steam hardware survey. Their sample size is around 2 million current users so reflects a very accurate cross section of VR users outside the Oculus bubble. 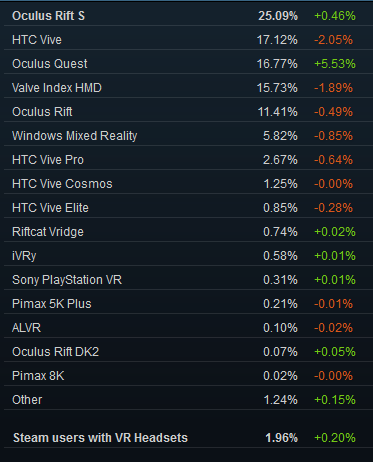 Please OXO, Urs, or anyone else working on this game... bring VR support to OpenXR... I really want to enjoy flying in Condor but the game borders on unplayable for an increasing number of users. Oculus SDK forces too many compromises for 2 out of 3 users.

ps. this has nothing to do with where devs choose to sell their games, https://www.khronos.org/openxr/


OpenXR is a royalty-free, open standard that provides high-performance
access to Augmented Reality (AR) and Virtual Reality (VR)—collectively known
as XR—platforms and devices.

Steam users with VR Headsets; 1.96%
I knew the number of VR Headsets users was very small ... but I didn't know that group was so small ... Almost nonexistent.
Condor2 Landscapes : Nephi (U14) for Condor2 and Boulder (KBDU) for Condor2 - Early Access.
Top

Steam users with VR Headsets; 1.96%
I knew the number of VR Headsets users was very small ... but I didn't know that group was so small ... Almost nonexistent.


That's like 2 million people though... who are active users and have computers good enough to run VR to varying degrees that are hungry for content and experiences. Small compared to numbers of people playing Call of Duty or Candy Crush maybe, massive by comparison to the number of people playing Condor or even most other flight sims, all of which are also a tiny niche compared to the general population of video games, likely less than 1.96%. There are also something like 2 million PSVR headsets out there.

Market share is currently small, but it's a huge market and good HMD's have been selling faster than they can possibly produced since before Covid so the limit is less about interest and more of access. As of right now, there are literally millions more VR users looking for content than there are glider pilots that don't already have Condor :p
Top

OpenXR doesn’t yet support all headsets.

Any which aren’t Oculus or WMR.

I stand to be corrected if you have better data!
Chris Wedgwood,
Condor Team
Top