The object asset database is a potentially great resource; are there going to be more items added?

I'm thinking that a few generic styles of building in different sizes should cater to most use cases; since most of us recognize towns etc by their position and general shape rather than studying individual houses (unless you're really low!!). Obviously very specific unique landmarks may be a different question... for instance towns with cathederals, stadiums, docks or bridges etc, but they can come later...
Top

If anyone has a license for 3dmax, or an app that can import .max files, this site provides a wealth of textured 3d models:
http://www.cadnav.com/3d-models/

Just about everything you mentioned and then some can be found there, and the license is free for personal and commercial use.

Some may be a little polygon heavy, Im not sure what the condor guidelines are, but there are 50K models there, just about anything you could imagine. Why reinvent the wheel if someone made loads of nice wheels and provides them for free?

edit: well, some actually are quite "heavy" and probably too detailed for condor. Still, could be useful as starting point or for some objects.
Top

I make a test with cadnav library to import an asset and put it in Condor 2 in a 10 minutes, no more!

There is Wavefront ('obj and mtl) files, so I import the model in Wings 3D and import and bind the textures (there is 2 sets of textures) with the corresponding materials (it is a mandatory step - direct import in object Editor don't bind the textures and the materials easily).

Then I re-export in Wavefront and load the new file in Object editor, and bind the textures to the scenery.


BellPH1.JPG
and save to C3D and add the textures in the scenery

I open Lanscape Editor load the scenery and place the chopper in an airport. Save all and made a flight!

My advice:
- This model is 14000 vertices a little bit heavy (there is a drop of 10% of the Fps near by the asset).
- Combine the objects which share the same materials.
- Change the bmp textures in dds or something lighter.
- Cadnav assets are interesting because models have multiples separate objects in multiple files format that you can adapt to yours own requirements.

Excellent, I hadnt even noticed they supported other formats, although it does look like most interesting models are in max format.
Here is another tip, if you use blender, apply the decimate modifier to reduce face count. I tried on a transmission tower and for most parts, I could remove 95% of the faces with hardly any visible impact 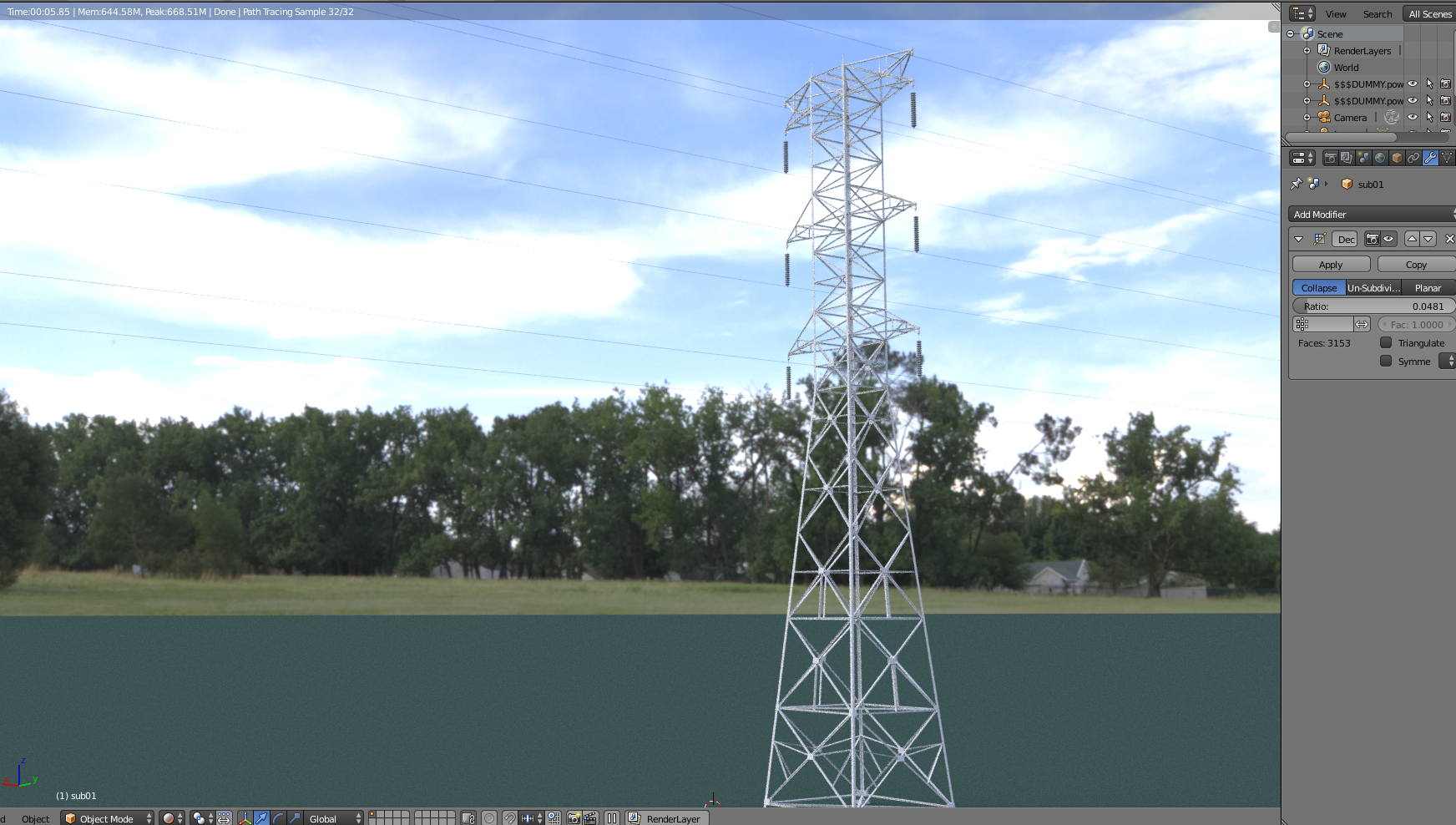 Should work well on buildings too, but perhaps not so good on things like that chopper
Last edited by janjansen on Wed Jan 02, 2019 11:23 am, edited 1 time in total.
Top

Although Condor 2 can handle heavier objects than Condor 1, I am strongly against using objects downloaded from the internet, unless you really know what you are doing. You can easily end up with a model with hundreds thousand vertices originally intended just for rendering, that will effectively kill your FPS once you get near.

Condor is a soaring simulator, not a VFR "close to ground" GA simulator. There is no need to make ground object too complicated, you will be watching them from afar anyway. One exception to the rule would be airports, but landmarks like houses, castles, factories, silos, etc. should be done with reasonable minimalistic number of vertices. An eye can be "cheated" a lot by a good texture on a simple object.

I did figure you would be able to download some of the free objects to be found on the internet; I did have a quick go but I have zero skill with blender and had no immediate success.

At the moment, I'm concentrating on virtual tree planting and lake identifying to upgrade the North UK photoreal scenery to hopefully include some 3D elements, so some assistance with the 3D modelling would be great as I'm already doing a very time consuming job!!

Eventually, I'd like to experiment with removing the a lot of the photorealistic bits (ie buildings/trees casting shadows and general low res textures) and see if I can make a fully synthetic north UK scenery that's passable.
Top

KipperUK , lets team up. I am moderately skilled in blender, but I still havent digested the scenery creation workflow. You tell me what you need, Ill try to make it in blender, you put in the scenery.

JBr, can you give me some ballpark estimate of what is acceptable as polygon count, say for a nuclear power plant or similar large object of which you will have only one in view? I understand if you start putting in houses or power lines and you put 100s of them, every vertex matters, but I could use some guidance.

Hi, all of you folks,

Yes it is important to decimate the hi poly models, and I agree with JBr that the scenery assets for Condor 2 should not be over 5000 vertices.
The good way is to make is own models.

Now I make another and last test with the AH6 model of Canevas. It is a 15000 vertices model.

It is proposed only with 3ds.

So I import the model In Wings 3D.
First difficulty the model is placed voluntarily 10 m under the ground

. You must put it on the ground first. Second difficulty there is no textures but the model is coloured.

Here is the results in Condor 2

Shot183.jpg
@janjansen : It will be interesting to make a little topo how you apply in Blender the Decimate modifier and come back to the Obj export.

Good continuation
You do not have the required permissions to view the files attached to this post.
*****- Xavier - (XDL * F-DELX) -*****
Top

Using the modifier is pretty self explanatory, if you know your way around blender. If you dont, just explaining the UI will take a small book Im afraid.

Basically import the model, select an object (right click), click on the modifier wrench thing on the right and add the decimate modifier. 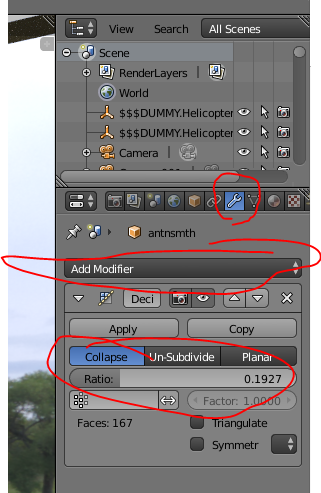 Use collapse and adjust the ratio to suit the object.

It doesnt do miracles though. I just tried on your helicopter, and I got from this:

9K faces before things start falling apart (edit: merging some objects before decimating, i got it down to ~4500 with minimal artifacting but squarish guns). While better, thats still a lot of faces for a prop helicopter....
(ignore the decimate ratio on those screenshots, I used 2 helicopters on different layers. And I applied different ratios for each sub object)
Top

Getting it lower will require some serious reworking.
Top

I've been experimenting over the Christmas break and I think I've come to realise that trying to replicate everything exactly is pointless; I don't have to fly far from home before I stop caring about individual buildings and just recognise general layouts - for example, Thirsk is 5 miles from Sutton Bank but from the air I just recognise a town on a major road with a large industrial estate on one corner. I added a bunch of generic buildings to represent the industrial estate, not exact shapes and sizes, and it worked well enough for me to get it in Condor.

So with that in mind; I figured there are two groups of objects that we need - specific replicas for 'single use' items that are large enough to be visible from the air and be used as navigation points or points of interest, and generic items to make up commercial/residential/industrial areas that we use to recognise towns and large facilities.

Scenery Specific / Single use items (with a bit more detail)

York Minster
Horse Racecourse (just the tracks, could use generic buildings for the stands) - Beverley, Catterick, Redcar, Ripon, Thirsk, York, Doncaster, Pontefract, Wetherby.
The Humber Bridge
The Angel of the North
Castle Howard (maybe castles/ruins could be made up of generic parts though)
Whitby Abbey (again, maybe can use generic parts from 'ruined abbey')

This is probably not an exhaustive list but I reckon should cover a hell of a lot of initial use cases.
Top

How many years do I have?

Reading through their ToS, I think we would be ok using it for condor sceneries:
https://3dwarehouse.sketchup.com/tos.html#license

I am struggling getting from sketchup to blender. But I may not have to waste my time if condor accepts the OBJ and MTL files I attached, which where exported from sketchup.
You do not have the required permissions to view the files attached to this post.
Top

Yep, I think some of these things should be available from other sources if you can figure out how to import; get rid of most of the unwanted polys, and export in the right format.

But, bearing in mind what was said above about Condor being a soaring sim not a 'look at the beautiful model' sim; I don't know if you actually would need years to build up a catalogue of generic objects.

Most of the buildings could easily be made up of two or three shapes with a half decent texture; you are never intended to fly close enough to them to realise that they are so simple - a flattish cube with a shallow triangualar roof, in a few different shapes would cover most of the needs for a warehouse, a cube with a cylinder covers a basic chimney.... I say keep them really simple, and rely on the fact that people won't be making a close inspection.

If you work on the generic objects first, and worry about the detailed 'unique' objects last - because they're the most effort for the least amount of placements.

If you made a cooling tower and a few industrially textured boxes - I could probably make passable versions all the power stations in Yorkshire or even the UK out of them straight in the landscape editor. Nobody is going to know the difference; all you see from the air to recognise them is the configuration in which the towers are placed, not the individual small buildings (which just serve to make it more of a complex).

We have a TV mast near our airfield (15miles or so) that we can see from pretty far away on account of it being over 300m tall, we don't go flying near it so I for one don't really know what it looks like up close - all I need to know is that I can see it from where I am in the area so that I can use it as a reference to navigation.

The only things that really need to be recognisable from up close are airfield layouts for the fields you can take off from / land at.
Top

Sadly for the Yorkminster .obj file I just get "Access violation at address 004CF1E0 in module 'ObjectEditor.exe' ... " so I can't test it out.
Top

Here are some of my objects. Free to use:

Return to “Airports and landscape objects”