I apologize if this is covered elsewhere, but after reading every guide I can find I can't find an answer for this.

My Flying field has a large turf landing area used solely for glider recoveries, and the standard grass texture does a poor job of approximating the actual surface, which we have found to be important for new students.

I was able to create a ~5cm tall object in the xxO.c3d file that enabled me to texture the entire landing surface with a 1800x8192px texture, but as soon as a wingtip touched the surface it broke the wing of the aircraft, which is unacceptable for obvious reasons.

I think I finally figured out how to reference the correct grass_muck file, and removed the ~5cm object mentioned previously, but it appears that muck can only be grayscale and not a proper image? and as such I just get the standard grass texture overlaid on the landing area with colors slightly darkened or lightened by the muck image.

Is there a way to get around a wing breaking with the xxO.c3d or can the xxG.c3d file be mapped to render an actual image instead of just the standard grass and muck combination? Is there a better way to do this? I already have the airport sitting on a 16384dds tile and that isn't really enough for my club's needs.

Again, I apologize if this is covered somewhere else.

It seems that you don't have read the whole booklet about Airports creation:

and there is also many other topics written by many guys to solve the crash of the glider when landing on your airport and to build an airport with Condor2.

So there is a lot of solutions to your issue in the Forum.

Thank you for your helpful replies, I had spent the last 3 hours or so looking directly at the forum post you linked, as well as the airport creation guide. I ended up working though the troubles I was having and this is what I've ended up with so far:

I figured I'd write up some things I figured out that weren't clearly documented anywhere else.

For instance, _Muck files for asphaltpaint and grasspaint can include any color and this color will translate directly into condor, simply arrange the UV map of the desired asphaltpaint/grasspaint object so that all markings of the same color are grouped together, then color away in GIMP/Photoshop. This can be seen in the red lines in the foreground of the two pictures (in the grasspaint_muck), and in the yellow, red and white markings on the asphalt (asphaltpaint_muck), even down to text on the asphaltpaint markings.

On the other hand, Muck for the asphalt and grass objects seem to only color the default asphalt/grass texture, and results in more muted colors appearing in flight, and not direct reproduction of the colors in the asphalt_muck or grass_muck files.

Xavier, your forum post, although helpful in terms of what the _muck textures can be used for, fails to communicate that those are just examples, and not limitations of the system. The line "Of course we can also put any color or texture to make sand or ash runways," from the airport creation guide also doesn't specify how to make these other textures. Colors are easy, but I have yet to find a way to make the airport G.c3d file actually reference a texture file different from the default Condor one, or an exactly named replacement in the Condor2/World/Textures folder, which is then used for all airports. I would ideally have a artificial 'turf' texture replace the default grass texture on the runway in the picture, but I have yet to find a way to do that. I've read through the airport creation guide multiple times, and scoured the forums and not found a way around this.

Even just a statement like "To create a 'muck' file, UV map each of the asphalt/grass/asphaltpaint/grasspaint objects to separate texture files, named asphalt_muck.dds etc., edit the individual texture files in GIMP/photoshop, then use the condor Object editor to map these new _muck files to each object in the airport G.c3d file. Be aware, colors in the _muck files are not directly reproduced on the asphalt and grass objects, they only overlay the colors of the original textures, e.g. white on an asphalt_muck file shows the original texture, gray results in darker pavement, and black results in a completely black asphalt. Colors only shade the original texture, an example of which is shown comparing the _muck.dds file in GIMP, and how these colors show up in game." 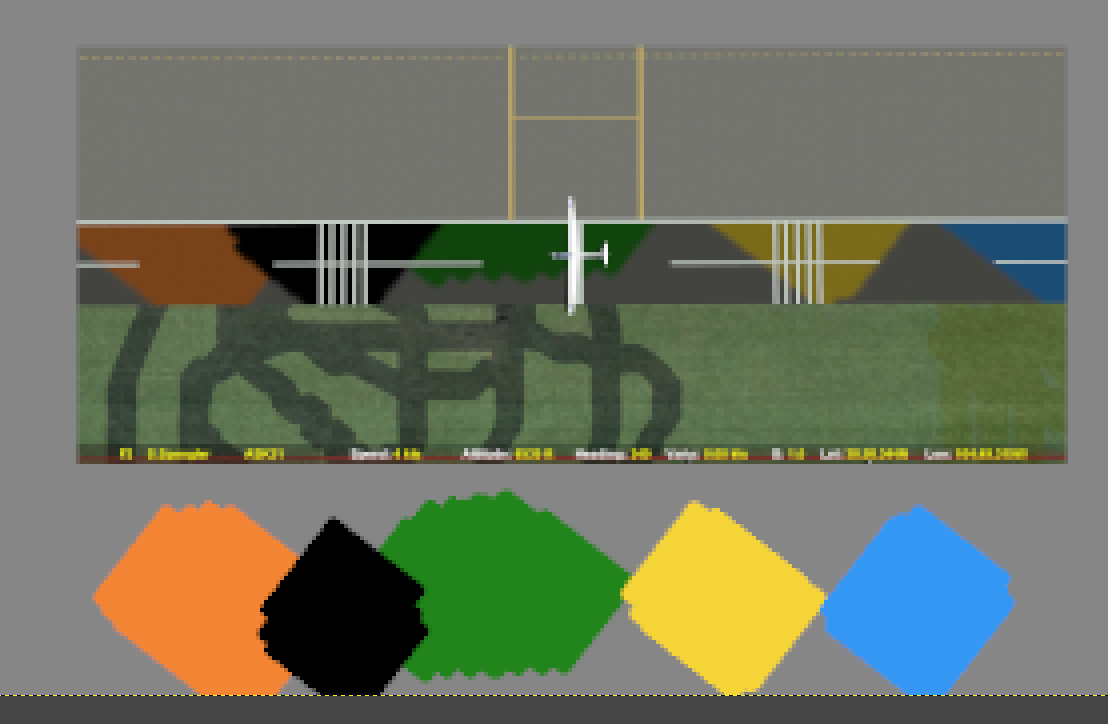 The issue I was having was when I tried to put a High Resolution satellite image directly into the grass_muck file, it was significantly darker than I wanted (which I now know is because it only shades the default grass texture). The crashed were also obviously due to me trying to use a file in the O.c3d file, which the glider can collide with. While this resulted in a perfect reproduction of the landing surface, the glider broke on landing due to me using a solid object as the landing surface in the O.c3d file.


That is not possible for the moment, though we've been asking this for a long time...
But you can use asphaltpaint objects with a texture. The standard asphaltpaint texture is transparent to a background texturing (with cracks).

It is difficult to explain the cooking, but, your words and illustrations show you have got the knack!

Now you must understand that you can improve your skill only by testing, and it is how I improve my own skill every day. There is no full explanations about doing airports and my booklet is already 132 pages long!

A/ High resolution texture 3 ways (grass tufts are only visible when landing):

2/ Lighten the high resolution textures and use muck.

B/ Frangible objects must be in G file and textures of frangible objects in the corresponding AsphaltPaint muck file.
3 photos of the same airport shown in the muck topic : Wings 3D, Object Editor and Texture png where white and red frangible markers are in the top of the Asphaltpaint texture.